I could have been a doctor or lawyer!

I must admit, when I attended the University of Arkansas I was famous for befriending those who were from Hot Spring as the chance to get a couch to crash on during racing season was a hot ticket rather than getting a room in a flea ridden hotel! I think it all started when I just turned 16 and we would sneak over to West Memphis to bet the dogs on a limited budget that we got from our parents. When I was in college I learned from some great degenerate gamblers and one of the greatest was the late George Paul as he was truly one of the greatest guys ever to crap between a pair of loafers! George Paul taught me the finer points of horse racing and that you don’t have to bet big on a horse to win money and that those dirty people that you see on the rail that you ‘think’ have the minum bet on a horse because of a name probably make more money than you do in a year.

Anyway we headed out on Friday and caught some afternoon races and crashed at our good friends lake house Randy and Arlene from Duncan MS, and we had a blast with them Friday night. Saturday morning was spent drinking bloody Mary’s, marking the racing programs and formulating our strategies. For the most part I was holding my own and only lost a couple of races when the Glue Factory longshot would come in first while poor Momma Trumpet was down for the day. The final race however was a good one as not only did Momma win, but so did Daddy and even AJ!

Oh and as luck would have it, some friends of ours from Memphis came over on Saturday morning and were horse racing virgins, then the lucky SOB hit the Trifecta in the big race and won 500.00 so drinks were on Will that evening. 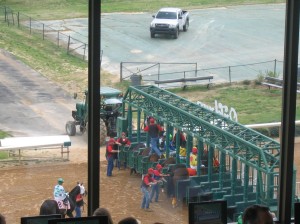 They are entering the starting gate 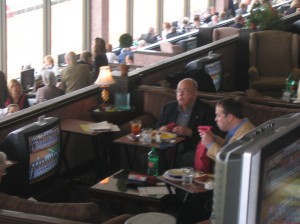 Now that is the way to watch horse racing in the Jockey Club, your own private living room!

Got to love her hat! Lord knows what she will wear on Derby day 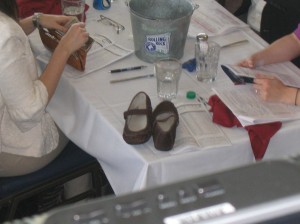 Looks like someones shoes were hurting them – This is Arkansas after all! 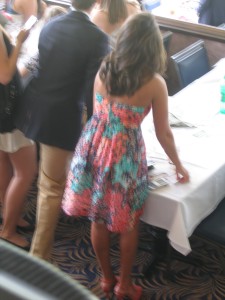 Aww bless her heart, she is all dressed up and is wobbling on her FM Pumps 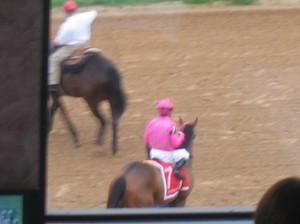 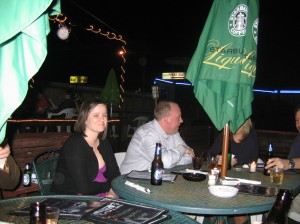 RT and his hat

Will telling me the finer points of horse racing gambling (lucky SOB!) 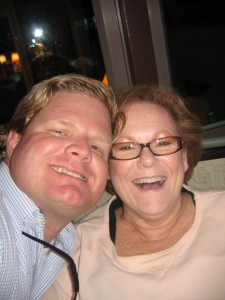 Self portrait of me and Ms Arlene

Aww
So in the end it was a good weekend, tune in on Easter Saturday when we head over to the Dog Track and bet the simulcast!
TTK!

So if you read my previous post you know that Memphis had its first and only snow of the year and that is fine by my standards, I do not enjoy snow nor do I enjoy grey days with no sun. One day I was talking to a vendor of mine who is up in Vancouver and he said that Memphis may have cold weather but at least you have the sun so I guess we don’t have it so bad. Anyway if you get right down to it the climate in Memphis and this area is pretty mild so it could be worse. Now as I said on Friday I was in shorts and Saturday night in snow boots and I must say that it is a miracle that I am not sick since here it is Wednesday and the temps got up to mid 60’s today and we are supposed to have mid 70’s by the end of the week.
So Friday night I was not really crazy about the food options that we had in the fridge so I fired up the grill (like Chunky I have multiple cooking apparatus) and grilled some chicken breasts while Ms Trumpet made homemade Mac and Cheese and sauteed Asparagus. That was a great meal and Didi, Seaweed (we call her Weed but she doesn’t smoke that) and Weather so the evening was a fun one as we got ready to head over to Weather’s house on Saturday.

What was left of the Yard Bird on Friday night!

Mac and Cheese ala Shobo

Man/Woman can’t live off of bread and water alone so we broke into the Carbunkle Wine Cellar
Now on Sunday morning we had the snow and the accumulation that we get on our patio is worse than the front as both houses will get more snow and that can be hard to move around. Not to mention that Maddy and Lizzie looked at me like I had lost my mind when I told them to go outside and pee before I cleared a path for them. I do realize that both dogs’ legs are shorter than the snow and how would I like to freeze my arse off going out to use the bathroom so I hooked them up and cleared a path.
I debated on postponing the ribs dish that I was going to make but I got inspired and said “what the hell, let’s fire up the Egg” and away we went. I saw this recipe on Anthony Bourdain’s Food Porn episode of grilled cheese sandwich but this had gourmet cheese and some smoked pork and onions to which Momma and I looked at each other and said in unison “Ribs and Cheese – Giddy Up!” So here is our version; 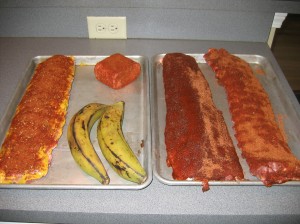 We have 3 racks, 2 plantains and a cube of Spam (Spam what are you thinking?)

What I had to deal with after I cleared off some snow!

Ruthie of http://belizesnowbird.blogspot.com/ sent this to me when I said I was taking one for the team by cooking in the snow. This is her beloved husband cooking in MN and I won’t say exactly what Ruthie said but the gist was “Get over it!”

Maddy thinking that Daddy has lost his damned mind, wake me when it is done. 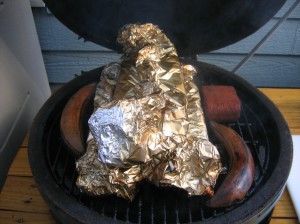 Used 1 rack of Rib meat for the sandwiches and we food savored the remaining for another day
Now at this point you take 2 types of good cheese (Smoked Gouda and Jarlsberg) and a good bread (Sliced Rye) and then top with the smoked meat and the onions that have marinated in Red wine Vinegar and you Pannini them and finish them in the oven.

Oh I can feel the arteries hardening already!

Oh did I forget the BBQ sauce that I won the Sauce off Trophy this past November?

Look at that love @ 350 degrees (getting close) 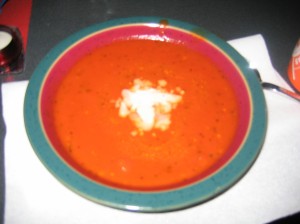 Ok so I also made roasted Garlic basil tomato soup too

Yep, I so do not need to make an appointment to have my Cholesterol tested for a couple weeks!
All in all it was a great meal and a good weekend of eating at the Trumpet household and it helped considering the work week that I had was from hell!
TTK!

Now I have always been a fan of Murphy’s law as if it could go wrong, it normally will. This weekend I was planning on getting some stuff done in the patio and do some cooking as well. I try not to watch the news as sadly the Memphis Media makes mountains out of molehills and quite frankly Friday we beautiful and sunny. The weather men were forecasting snow on Saturday to which I am thinking “Sure I guess the local Schnucks needs to blow through some milk and bread.” So anyway I came home at lunch and shot these pics of the dogwood trees in our hood (DON’T WORRY, THIS BLOG IS NOT BECOMING A NATURE BLOG) and we even grilled out Friday night with some friends and even got some phone calls from the Captain!
Steve I may be short but I love a good foam call, please feel free to add me to your prayer speed dial list anytime you feel the need!
Saturday the weather had changed and we had rain during the morning. We went over to a friends house to watch the Tiger game at noon and sure enough by halftime the rain turned into sleet/BA Snow but I still wasn’t impressed. We ended up heading home around 6ish and cooked a pizza and watched some movies Saturday night. It was around 8ish that I noticed that we were indeed getting accumulation on the streets and our patio, I stayed up a little later than I should and watched it snow. The next morning Maddy and Lizzie (tiny toy poodles) wanted nothing to do with it and I shot some after pics. 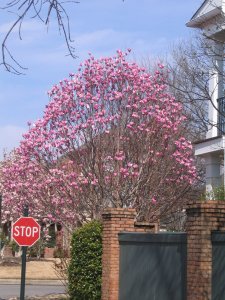 Not a Dogwood but is pretty anyway 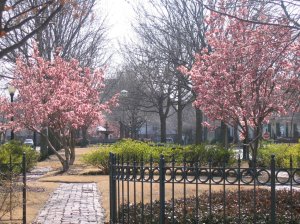 Heading to get more beer on Saturday (Damn you Weather)

Can you tell who’s car went to get beer?

Who needs a bag of ice! 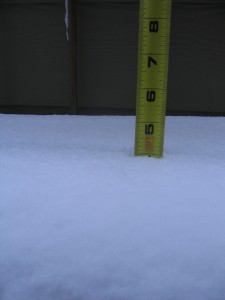 I know that peeps in Canada and Maine are snickering but that much will shut the city down! 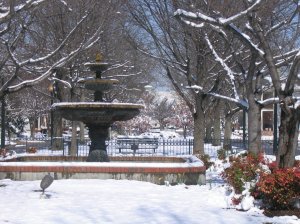 Some of those things that come up in the spring (can’t you tell that I have a green thumb?)

Don’t think we will have blooms when it thaws

Still don’t know the name of the tree
Ok, now here is where I normally will sign off but around 1ish my crackberry went off and I get an email from Rump Shaker who is down in San Pedro and it read the following;
i am assuming because of the snow in atlanta.i swear i am not lying-the next flight from belize to atlanta is not until wednesday.i talked at length to an agent.
i know you all are thinking i somehow finagled this but i swear i did not!!!!
so it looks like i will be home late wed night
i will check daily with delta just to see if i can get off this island sooner.
Now I have heard everything but that takes the cake (being sarcastic because I know that RumpShaker would not leave her co-workers hanging) but I am more pissed off that we never thought of that before! Anyway after that email and a little bit of a rant I get an email from my friends down in Belize that they met her and told me of her “bad luck” so hurry home there “Snowed in San Pedro!” Snicker, Snicker, Snicker!!
TTK!