Before I even start lying, all of these pictures were ‘borrowed with love’ from our dear friend’s blog Ruthie’s_Blog as I forgot to bring my camera on our most recent trip to San Pedro down in Belize. Mrs Trumpet and I went down for J-Bob’s spring break with my mother, sister and took a day trip with a bunch of friends who we frequent Dale Hollow Lake with as well as our new friends. We started the day aboard the Lady Leslie catamaran and headed over to Hol Chan marine park where everyone enjoyed a snorkel with the staff leading the way. After another dip at Shark Ray Alley where we saw the nurse sharks and sting ray’s we headed over to Ambergris Caye’s sister island Caye Cauker. A good time was had by all and we had the Mayan Gods smiling on us as we had spectacular weather. Good Times!

Much Bigger than the SS Minnow 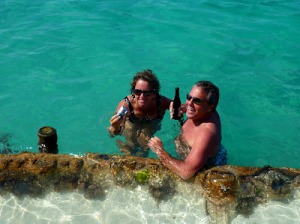 Dexter Clubfoot being sung by Renita and Richard 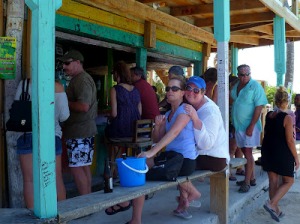 That isn’t a beer bucket, it is a bucket of Coke Lights (I promise) 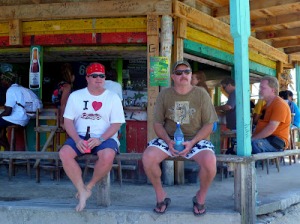 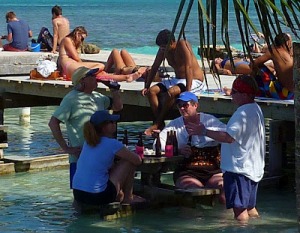 So a Rabbi, a Priest and a Band Geek go into a bar….

Good to be the king! 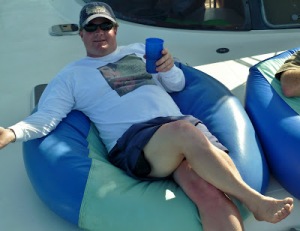 I really need to learn how to relax and have a good time ya know? 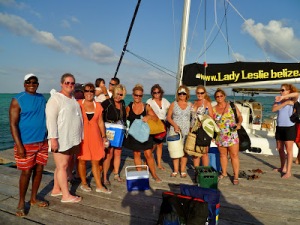 Group Shot of the gang
A special thank you to our friends who own Changes_in_Latitudes who organized the trip and all those who made the trip, once again, we had a blast and can’t wait till next time!
TTK!
CBT

So rewind to New Years Day when 75% of the world is recovering from a bad hangover I am celebrating with friends the start of the end of the Mayan calender. As we are drinking champagne, eating black eyed peas a friend of mine asked me if I had a New Year’s resolution. I told her that I was planning on losing the extra 35 pounds that I gained during the past year while Momma was undergoing treatment for Breast Cancer as I was pushing maximum density. She told me that she also would like to get on the health kick and if we wanted to train together for which I said sure, why not. The next couple of days she forwarded me an email for a 5K race at the end of February and suggested that we get in shape for this. Now back before our ‘little setback’ Momma and I enjoyed indoor rowing but sadly they moved their studio from South Main to the tip of Mississippi so I pretty much morphed into a slug and I needed to do something. I thought about it and said sure, I can do a 5K, hell I went to a school who had numerous national championships in Cross Country and Track, if those beer drinking fools can run 20+ miles a day then this is possible right?
Two days after the BCS Championship ole CBT went on the wagon and started eating better in an effort to get back in the good graces of my Internist who dogged cursed me on my last doctor’s visit. A couple of years back we purchased a treadmill that was sitting in the spare bedroom collecting dust so for an hour a day ole CBT would walk, brisk walk and even jog while watching Seinfeld episodes on the TV. I think the first month I racked up 50+ miles and started to see some results in losing weight. I ended up buying some running shoes at Costco and since I recall my College days watching the cross country teams, I bought a second pair of shoes to minimize wear and tear.
The month of February I kept at it by incorporating more jogging over walking and if you can believe this, I started to feel better about myself, this is going to be a piece of cake right? Well a couple of days prior to the race I noticed that my sinuses were acting up and I was contracting a good ole case of bronchitis. Race day, yep I felt like crap but since I shamed my boss into joining me and my running partner I knew that I couldn’t wimp out and had to do this. As far as the race, well it wasn’t pretty but I finished the damn thing under 45 minutes and low and behold CBT finished his first 5K and lived to tell about it! The week after I was sick as a dog and after a visit to my previously mentioned internist, I had a classic case of an upper respiratory infection and was given all kinds of medicine to combat it. Guess my body was getting me back for running 3.2 miles in downtown Memphis.
Another friend of mine, who also ran the 5K, sent me a flyer for another 5K the week after I was to get back from Spring Break and I told her that I would have to pass on this one but (wait for it) CBT is going to run the John “Bad Dog” McCormack Memorial 5K in mid April. Now before you start wondering if you will see my short fat arse running the Memphis half marathon, I plan on taking it one race at a time, I mean let’s don’t go crazy just yet folk….

In the meantime if you see me jogging in the 38103 this spring, no I am not being chased and stop laughing!

First Beer in 2 months (even though it was Ultra) with my running buddy D & my boss after the 5K in February.
TTK!
CBT

Got back from yet another wonderful week down south of the border (17′ 57′ 0 N & 87′ 57′ 0 W) and promise (yet again) to start working on this damned thing more. In the meantime peep Chunky_&_Ruth’s_Blog and you can see an award winning Cannonball by yours truly.

I promise to 9lb 8oz baby Jesus just lying there in his new Tebow Jets Jersey that I will get on the stick!