I know that this post is a couple of weeks late. I have been kinda busy and add to that Geranium has been working at my creative desk…….#herfault

Without further adeau and in no certain order are some highlights, difficulties, not so great moments. I look back on this list and I see things that have defined us. I chose that certain quote about the windshield vs rear view mirror for a reason. Without further adeau;

We look back for a moment and are very grateful for our past experiences. Some of those experiences without a doubt has made us move forward.

Last week I got one of these notifications that 4 years ago that it was my last board meeting at HW/AMF. I started to think to myself that time has flown by. It was just yesterday that we were hanging at the South Bluffs pool having our Friday board meetings and the Horners only had 1 kid.

Looking back over the past year it has been a whirlwind with Tons of Travel. In no particular order;

We also made our yearly pilgrimage to Per Se for Christmas. We made a trip to Philly for a Christmas party and had some fun times with our friends over the past year too.

It is still the best decision moving up here we ever did.

*Disclaimer – I am preloading this on Wednesday night so next week my stuff will be more current.

Have a good Memorial Day Weekend!

I have been remiss in posting these so here is a bonus Post Presidents Day entry for you 15 readers. We had a blast in London and hopefully we will be doing something like this again in the near future.

Regarding London, it was great seeing PNG Mike and Lady E as well as Lord Jimmy and his parents and seeing Vegas JD was a bonus too.

It was a great time and we will be back!

You might as well add another sporting event that I have been exposed to that you can drink like a fish, and cheer for the home team! I recall one summer I was down in San Pedro Belize while World Cup was being played. Mexico was playing that afternoon and the entire town came to a halt to watch the match. As luck would have it while we were in London we were going to be in town for England National playing the Irish team. You could tell that on Saturday it was game day because the pubs were busy.

For those of you who care, the teams that make up 6 Nations are; England, France, Ireland, Italy, Scotland, and Wales. To understand the game it is similar to football but without helmets or pads. Oh and unlike College or Pro the place kicker is actually the person who scores the touchdown (I don’t know the proper name) and they don’t have to rely on someone who has one job. I like it already

Papua New Guinea and Lady E met us up for some pints and we were also lucky enough to have a drink with JD from Las Vegas. We enjoyed some light fare and many pints that afternoon and had a great visit. Oh and it was a bonus as England won handily and they were chanting that they wanted Clemson next.

Sunday we headed over to China Town to see Jimmy’s Mum & Pop and enjoy some good Chinese food with questionable rude servers. After our meal we walked around and checked out some of the museums on a Sunday. Not a bad way to spend the weekend catching up with good friends. I told my boss on Tuesday “I know you will find this odd but we have some friends who live in England.”

It was great seeing everyone and thank you for taking time out of your weekend to spend time with us. You are welcome to our joint on this side of the pond anytime.

Sunday afternoon after hanging with Jimmy’s Mum & Pop we decided we wanted to make a run over to the local Mall of London. You know I am talking about….Recall back in the day when the only way you could get a Chick-Fil-A Chicken Sandwich was a visit to the Mall? I mean where else could you get your Hot Topic and Spencer’s crap and then enjoy some chocolate chip cookie? And if you wanted to go ice skating this place was it.

London’s version of the Mall of Memphis is a place called Harrods in the East end of London. We took the Tube over to Knightsbridge and took a visit to the food hall. If you don’t know what Harrods is all about you can read up about it here. You have seen all those signs that read “If we don’t have it, you don’t need it.” Harrods is just that store. Upon entering the hall, you realize that this place doesn’t mess around.

I am going to leave it now up to the pictures but if I ever won the lottery, I would be heading there for meals at every one of their 24 restaurants. That beats the shit out of the Mall of Memphis doesn’t it?

Now show me a Mall food court that can beat this one? I dare you!

Note to self, when you think that you can make a quick trip across the pond to England for a long weekend at my age it is going to hurt. If you didn’t know; I headed out last Thursday night to hang out with Mary Louise for the weekend in London. She was finishing up a whirlwind trip of her own and had a meeting yesterday with her people. I got home last night and naturally (it is 3AM Eastern Time as I type this) the jet lag is strong when you get older. Enough about me, lets get to the title of this worthless dribble.

Happy Chinese New Year as this is the year of the Pig. We were in the Chinese section of London on Sunday having lunch with friends and they were all decked out for the big party. I keep saying I am going to go down to Chinatown and see the festivities. Maybe if they are doing it this weekend I will head over there.

So Happy 3 and a half year anniversary to us for ripping off the band-aid and moving to New York. It really has flown by and even though her ass will be getting on a plane in about 2 hours Geranium would agree with me. Again, I am not dogging Memphis, but we really like living up here. We have slowed down a tad on our exploring the city we still find it great and are enjoying ourselves. I mean could I really have flown to London for a long weekend Thursday night after working and will be back to selling tickets in Times Square today? Got to love direct flights.

Another anniversary that I am particularly proud of is that 12 years ago Mary Louise and I went Tobacco Free. We decided to quit the Tuesday after the Super Bowl and we did it together. Copenhagen and Virginia Slims Menthol started losing money on us 12 years ago and even though we both gained enough weight to support another child it was the best decision that we could make. So to all of you who are battling your demons keep up the fight. People ask me if I miss dipping. Who are you fucking kidding? Sure I miss it but I don’t miss having my gums scraped or the chance that I could get mouth or gum cancer.

I will post more about the trip to London, I have a ton of pictures that I took sober(ish) and will recap later this week. Happy Chinese New Year, Happy “half” Anniversary of being New Yorkers and Tobacco Free to us!

Have a good week, even if it is Tuesday!

Apologies to my 14 readers, I have been kinda busy as of late. Mary Louise and I had some friends in town and went out to ABC Cocina to have lunch with them on Saturday. We hadn’t eaten there and we had a great time catching up. That evening we went back into the city and had dinner with the Landlord at a Little Italy establishment. Sunday Mary Louise headed out on the road and is in Spain for a couple days. Then she goes to France for a couple more days. Then she finishes up in London this weekend.

Because I am such a humanitarian I decided to head across the pond on Thursday night to hang with her over the weekend. Granted because she has her a nice hotel room in Westminster close to the Thames river doesn’t suck. As of now we have plans to see Papua New Guinea Mike on Saturday and The Thompson’s on Sunday. Other than that we are going to wing it.

I will keep you posted!

It is rare that my personal foam rings. Normally when it does it is either a doctors office confirming my upcoming appointment or a telemarketer. Since I keep the 901 area code phone it is pretty easy to tell who is a real call or who is a telemarketer. I have to give them credit, they mask the number to make it look like it was my number missing a digit or something like that.

So the other day when the phone rang I answered with my traditional “Go for Carbunkle Trumpet” and the caller was asking for the owner of Bar 595. For whatever reason I decided I would play along instead of saying that I was busy and to remove my number from your fucking list. I said that I was but I was kinda busy and to hurry it up. They were telling me about their credit card solutions and if we were interested in changing vendors.  I said I was all for it and have a rep come by tomorrow after my lunch rush.

English Mike I may give them your number next time.

One of the only redeeming qualities of Facebook these days is the “On this date” part where you can see what you posted on this day for up to 10 years. On the 5th year of this past week we were across the pond for our good Friend’s wedding. Yep Papua New Guinea Mike and Claire were married 5 years ago this past week. Naturally we wished him congratulations and a text thread started with a couple of the boys. I didn’t want to remind anyone but in the past 5 years the following have occurred; 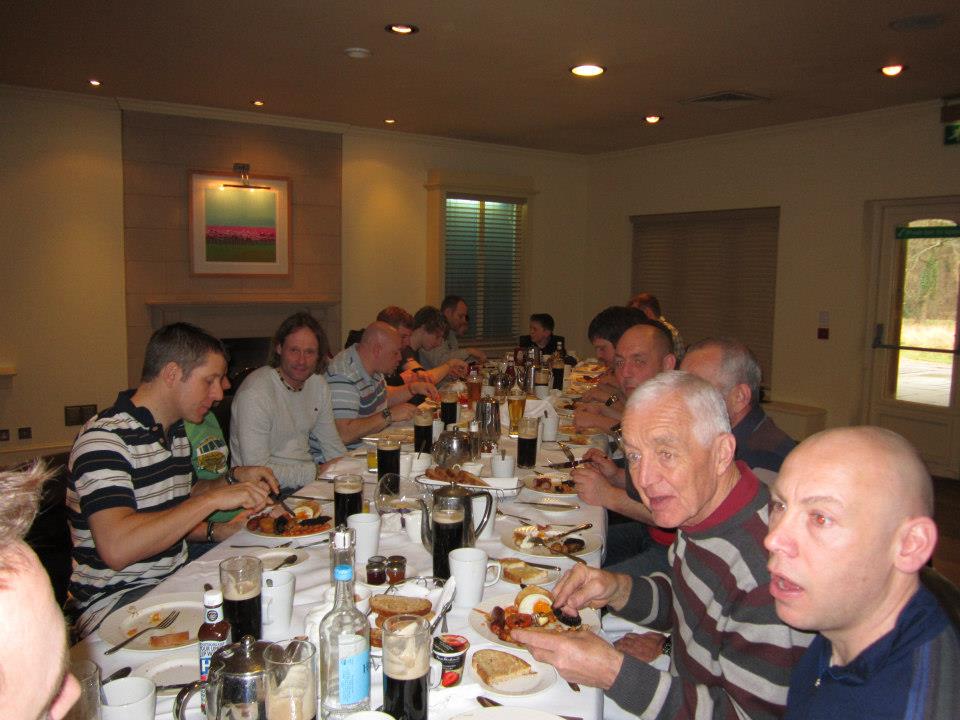 Kegs and Eggs with the Lads. See all those Dark Liquid Glasses that are in front of everyone. That is English Coffee.

Right after that the Bar decided it was “Last Orders” because the Americans were swinging an invisible jump rope. 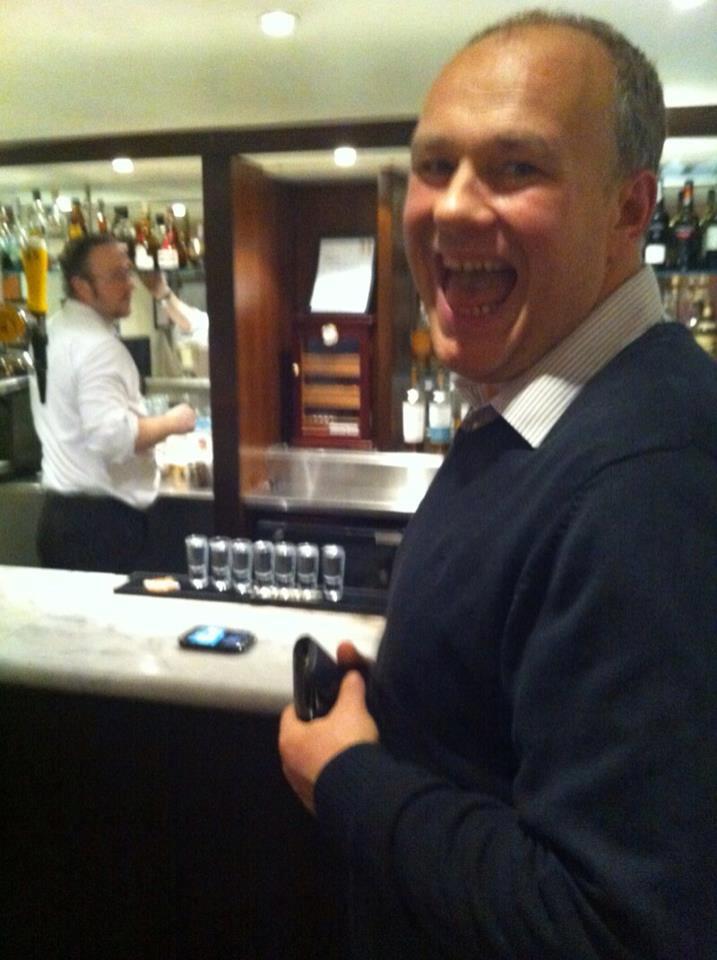 If you see this man and he says “Lets do a shot” you run like hell!

Oh Look PNG Mike “Iced” down some beer for us.

Mike and Clarie’s English Garden – We will put in an outdoor bar at the fenceline!

I am only posting this so that the Asian Fireman and his wife can save it and we can torment Wee Fiona when she gets older and starts to date.

Back when all 3 of these boys weren’t procreating.

I think that we need a return trip to Big Smoke soon. Anyone up for a field trip?