Shout out to BK who is a faithful follower of this “Worthless Dribble” of a blog! (putting this here so it will appear in the header of my Social Media posts)

Regarding the Title…that was the body of the text message that I got from (Name Withheld To Protect our Northern Values) about 6 weeks back. So it would appear that Hank Williams Jr was doing a show with Lynyrd Skynyrd in a farewell tour for Skynyrd at Forrest Hills Stadium. Now before I sell out the person who sent the text message I doubled down on them. I informed (said) person that I will have to check. I told them I know “a guy” who works on the Hank tour and I would message him to see if 1- he still was still on tour and 2 – he could get us some better seats.

BK responded back to me saying that he could take care of us and get us some tickets (he knows I am not a ticket mooch) because I wanted to see him and hang out. For those of you wondering who this BK guy is…..well… we served time together. I am not talking about Federal “Pound You In The Ass” Prison, I am talking something much worse…. A month long festival that included a 3 day Music Festival, Rednecks with Smokers and then KC & The ‘Mother Fucking’ Sunshine Band! Oh did I mention that we also had an almost Tornado hit the park so on night 2 of the Music event we evacuated >30K people? Yep, BK and I may have been different ships at sea at the time (I was fun-employed, he was about to get married the following January) we respected each other and played well with others which made it easier to deal with that crap……Well…..Except for the WCBCC Volunteers. We both would choose Communism over them! (that may take a hit on the blog but nobody reads this shit anyway)

Say what you will about Social Media and Facebook. I don’t post much on FB except to plug this worthless dribble but BK and I kept up with each other via this platform. When his (Saint of a wife,I might add) posted that she needed some birthday cards for BK’s monumental celebration how did she get the word out? Facebook. Anyway this was the mode of keeping up with our lives for the past 9 years.

Flash forwarding to the show. Let me tell you (sorry Maria) but Forrest Hills Stadium FUCKING ROCKS as a venue! Holy Shit and it is fun as crap too with the Food Trucks and the booze! The fact that its nestled in the middle of Forrest Hills Queens (MEMPHIS FOLKS – Think Cross between Mud Island Theater Seating but in the midtown are like the Levitt Shell Location) it blows my mind. Oh and the line up this summer isn’t that too fucking bad either.

So before I go into the pictures; Thank You BK. Thank you for tickets and thank you for following this worthless dribble of a blog. But most importantly thank you the fact that one of these days I won’t have to come to your office so we can hang out have some laughs. “Play it Loud” runs at the Met till the fall so come on up! If not I welcome a trip down south and we can giggle at some of the stuff we have seen over the past 10 years. Thank you.

What a great Sunday in Queens. Anyone want to come up for September 11th. I want to go see Willie……

Wow! Some of you readers are still kinda salty that I had such a killer Friday last week. This is a perfect time to tell you about a discussion I had a couple weeks back. Back in March right after we went to see Billy Joel in MSG I was talking to some work peeps about how great the show was and so on. We then were talking about great and not so great performances that we have seen in our lifetime. My friend started telling me how one of his buddies was dying to see either Bette Midler or Barbara Streisand. They paid a king’s ransom and got tickets to see the show. Apparently the performer wasn’t really into it that night and “phoned it in”. Let’s just say my friends buddy was pissed and to this day hates that performer with all the bile in his belly.

I can say that with my past life experiences I got to see both the front and back of stage shows. I won’t name any names but I have seen Diva’s and some people that I keep waiting to come across the teleprompter saying they have been found dead from an Overdose. I will list a couple here in a few later but last Friday when we were waiting for The Avett Brothers to come on stage we had a similar discussion. One of my work cohorts said that they already knew that the Avett Brothers will kill it tonight. I looked at this person with the (Southerner didn’t comprehend what the Northerner said) puzzled look and they tell me “Dude this is Madison Square Garden. It is the Mecca of venues. You either bring your A-Game or you stay the F at home!” It makes sense is you think about it. Which do you think that a performer is going to get more fired up for; the 1PM time slot at the Washington County Fair or opening act at Madison Square Garden?

Anyway not to rub further salt in the wound but The Avett Brothers came on stage and completely shredded that stage! Not to further rub it in to my friends in Memphis but living up here really doesn’t suck. First of all you have everybody and their brother trying to get a date in MSG (they have an event 365 days a year) or if they can’t swing that they go to a smaller venue that still is killer. When we saw Squeeze they both admitted that they were pumped to play in New York. Anyway without further ado here is a short list of best and worst performances I have seen in my lifetime;

Greatest Shows CBT has seen (in no particular order)

Jason D. Williams getting it on stage! This concert series showcases the local musical acts and is a free festival, if you have ever attended the old King Biscuit Blues festival down in Helena, it reminds me of it. As old Charlie Musslewite used to say “Son if you don’t have the blues after you spend an afternoon at festival then you ain’t got no soul!” 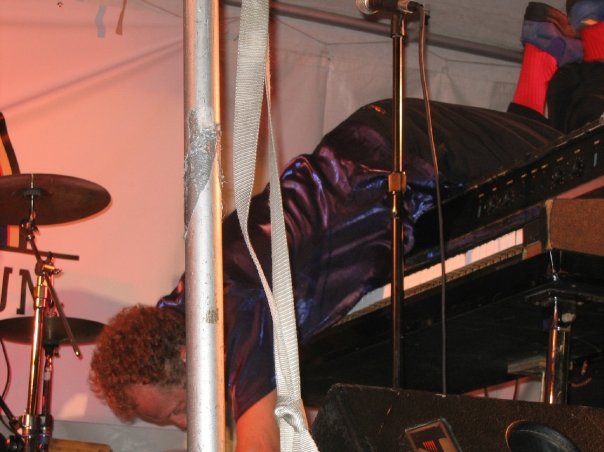 Consummate Showman! Sure he is crazier than squirrel poop but you got to love a professional.

Puddle of Mud at BSMF – You ever heard 6K people scream “Fuck You”? 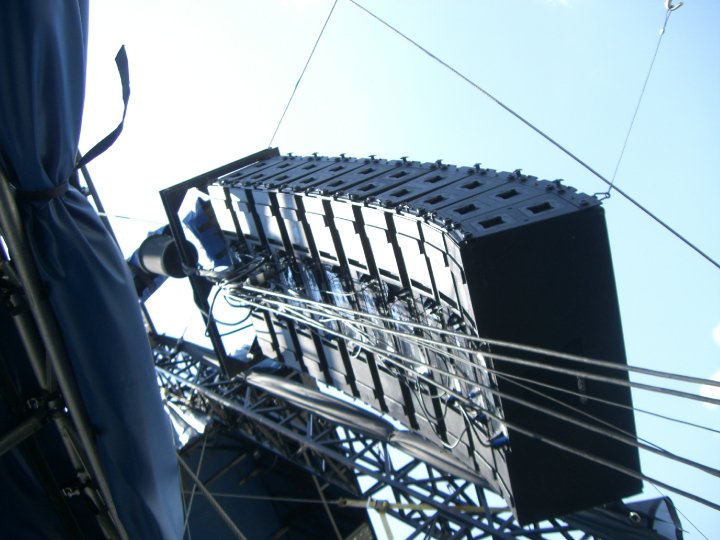 Ever wonder what a wall of speakers looked like? 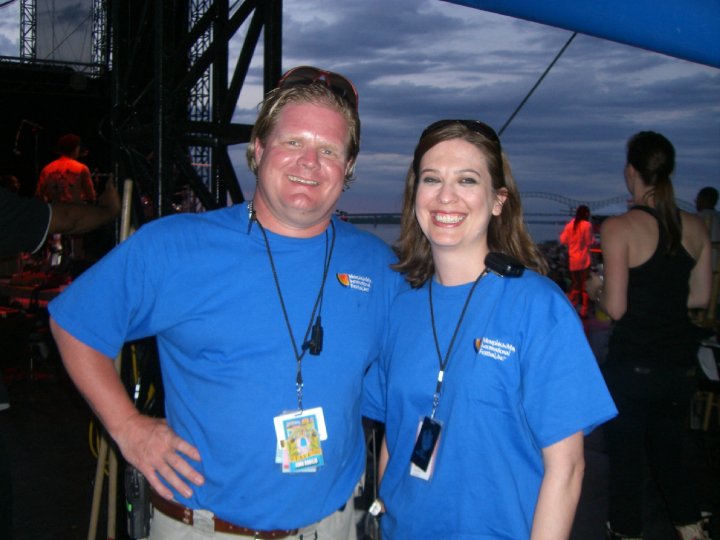 Harms and I at Earth Wind and Fire’s Sunday Service. Top 5 Moment! 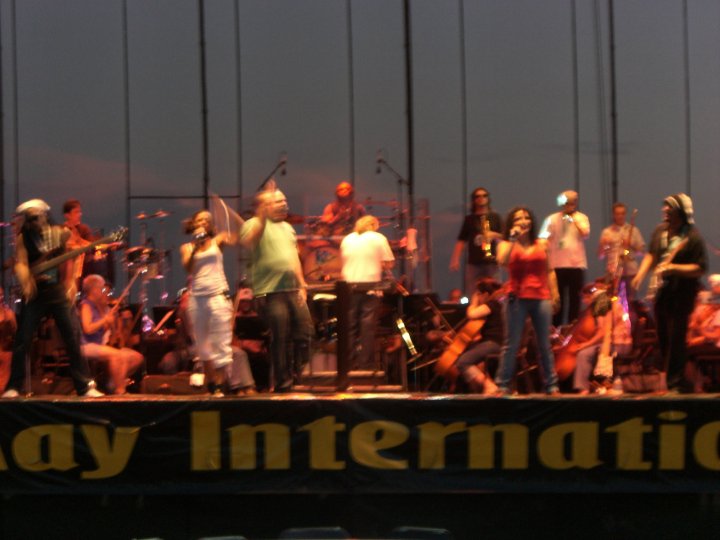 I am not saying that KC is a Diva but ‘she’ does expect the best from his stage performers. 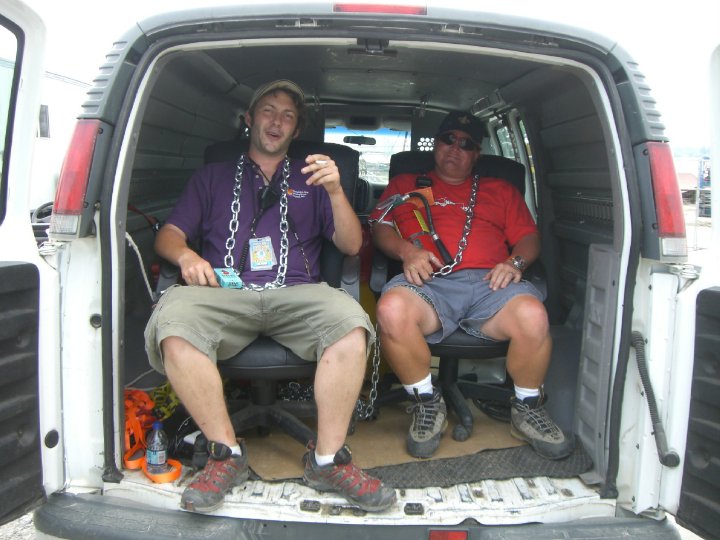 I won’t go into great detail but the River and MIM will change you.

So what’s your favorite show?