That was a text message that I got from LJZ last week.

Seriously, I would have just as soon sat in the backseat of an un-air conditioned station wagon between two 15 month olds kids in car seats sucking on pixie sticks of sugar than be there. Did I mention that I was on a 14 hour road trip to Florida and said kids hadn’t been out of those chairs for 7 hours? It was that bad of a day for me.

Hopefully I have given you enough imagery to tell you how pissed I was that fateful day when LJZ asked me to come to the home office for a gift she made for me.

This was the gift that LJZ gave me. *SECOND DISCLAIMER – No I don’t use elicit drugs, I got 99 other problems than this one. (booze, beer and cigars are still ok right?) 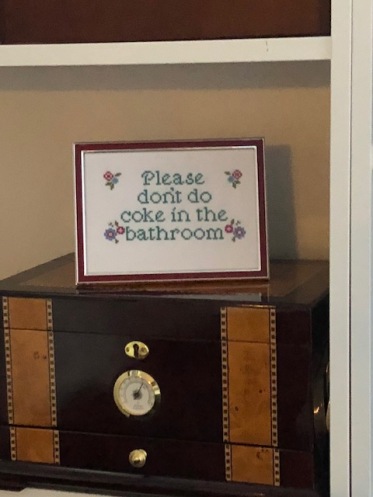 I was floored. I loved it!

The fact that LJZ cross-stitched this in the airport on a work trip makes gift so much more special. Oh what is the big deal about “Not Doing Coke in our Bathroom” you ask? (see next picture and comment)

This is the original cross-stitch that sits at a bar a couple of steps away from our soon to be former apartment and we have a funny story about it. I guess Shobo and I need to go back into the bar business.

For those of you who are wondering what storyline you missed please don’t read to much into this post. I appreciate this gift for a many reasons.

Thank you LJZ you really are a treat!

Well I sure as hell won’t do that ever again. You recall that POST where I called out Mother Nature and some of our New York friends? Well the Blizzard called Jonas came into the Big Apple and damn near crippled the city that never sleeps. Let me back up a bit; Friday morning I am getting into the elevator at work and there is a guy holding a snow board. I ask him if we are supposed to get “that” much snow this weekend and he laughs it off saying he is heading to Vermont right after work to “go shred the mountain bro!” Wonder how that dude made out and why he didn’t wait and could have done that shit in the East Village. Now we all know what happened, New York according to the weathermen, missed the biggest snowstorm by .01 of an inch.  On Saturday the travel ban was issued which meant no cars, Uber, or Yellow Taxi’s so that the Snow Plows could get a handle on the streets for Monday’s work commute.  We originally planned on hooking up with the Murphranks for snow drinks but considering they are on the other side of the tracks in Park Slope we both were afraid of being stuck if they closed the bridges or subways – which happened. So after a relaxing morning watching the pissing match between the Governor and the NYC Mayor we made our way to The Allie Way Sports Bar for afternoon beers with Caitlin (no not him her) the bartender. Snow days in New York are great, but having a snow day on a weekend is even better!

On Sunday Morning I am taking the dogs out for their morning pee when Paul, the doorman, congratulates me on surviving the second largest snowstorms New York has ever seen. 30 inches is what was recorded at JFK airport, I am 67 inches so I am glad that shit stopped when it did.

So lessoned learned, I am going to keep my mouth shut when it comes to making fun of Old Man Winter or Mother Nature. She didn’t play this past weekend. And like I said before thank God this storm was on a weekend because if it were during the week, well it wouldn’t have been pretty

No that isn’t haze, that is snow falling so fast that it makes it look hazy

Across First Avenue where people destroyed the Bread aisle

So that is what those things are used for!

Rookie Mistake, never stand near that thing when it is ‘blowing’ snow! 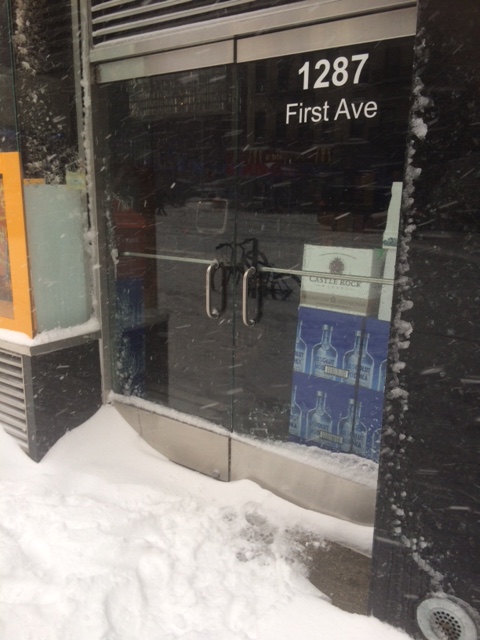 Yes that is when the panic started in the UES, Dr. Wine was closed due to the storm

Mrs. Trumpet wearing her 14inch boots and this is where you have to cross the street. Now I see why I needed tall boots for the snow.

At first we wondered why they plowed E70th street so frequently. Then we realized that NYP and Sloan were at E70th and York and the Ambulances needed clear roads.

If only that were sand and it was 90 degrees!

Here is Manny our building Super keeping the sidewalks clear 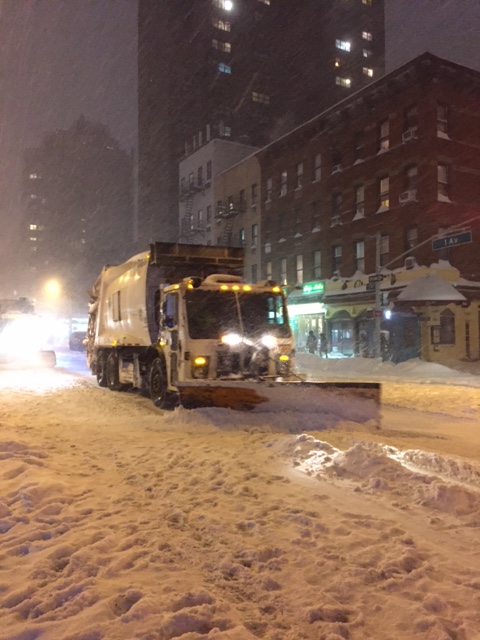 Bean the Springer Spaniel’s footies were out drying

Now can someone please get this shit off the sidewalks?